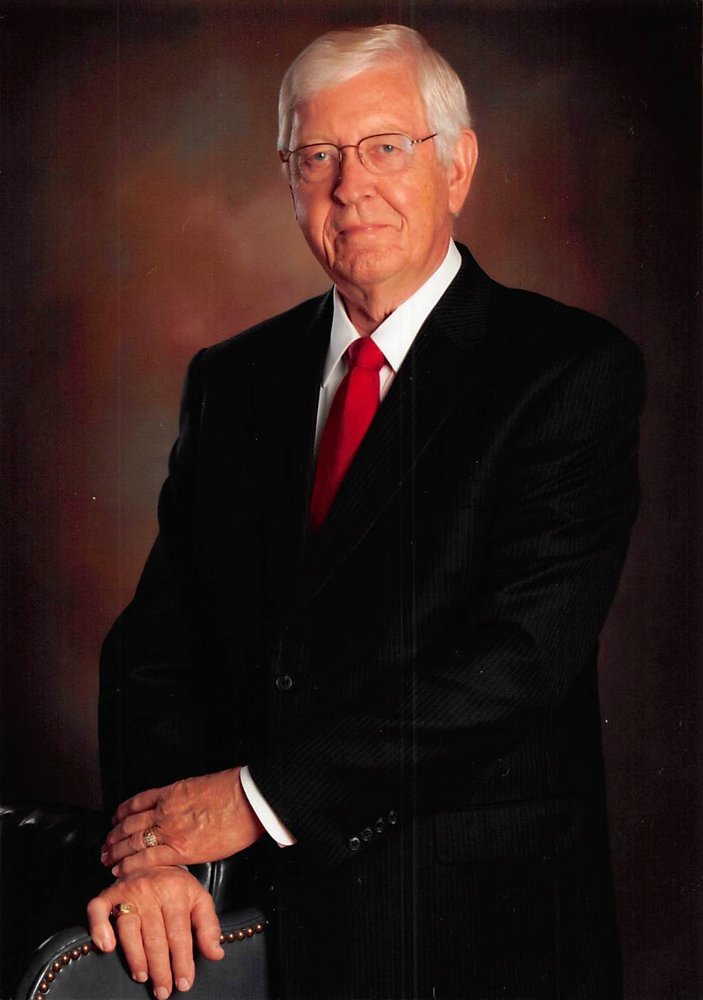 Conrad G. Burrell, 83, of Sylva, passed away on Thursday, January 10, 2019. He was born and raised in East Laport, Cullowhee in Jackson County. Mr. Burrell was the husband of Juanita Burrell and the son of the late General and Betty Sue Burrell. Conrad became a Board Member for the 14th Transportation Division in 2000. In this position, he had oversight of ten counties in the westernmost part of North Carolina and was instrumental in the construction of numerous transportation projects in Jackson County and Division 14. He received the Order of the Long Leaf Pine twice, the highest civilian honor awarded in North Carolina. He was a board member at Southwestern Community College for 20 years, serving as Chairman of the Board for 12 years. He served as a Board Member at Harris Regional Hospital for 15 years and also served as a Board Member at Advantage West. Conrad was elected as the Register of Deeds for Jackson County in 1974 and served for 24 years until 1998. He was elected as a Jackson County Commissioner in 1998 and served until 2002. He was a member of the Sylva Rotary Club, having served as Secretary, Treasurer and President at various times. Prior to becoming the Jackson County Register of Deeds, he held a variety of positions; working for Cannon Bros. Oil Co. and the NCDOT in the Equipment Department for 12 years. In 2008, Conrad was honored with the Thad Eure Distinguished Service Award for his loyalty and support of the North Carolina Democratic Party. He was preceded in death by two sisters; Hettie McManus and Carrie Whitley and three brothers; Alvin, JC and Charles Burrell. In addition to his wife of 64 years, Juanita Sims Burrell, Conrad is also survived by one daughter; Karen (Randy) Herron, one granddaughter; Reagan (Nathan) Miller and one great grandson; Kingston of Buncombe County. Several nieces and nephews also survive as well as special friends; Arnold Crawford, Johnny Phillips and LaRae Hooper. The family will receive friends on Sunday, January 13, 2019 from 1:00 until 4:00 pm in the Conrad Burrell Building on the campus of Southwestern Community College in Sylva, NC. Funeral Services will be held on Monday, January 14, 2019 at 11:00 am at First Baptist Church of Sylva. Rev. Jeff Mathis, Rev. Dennis Burrell and North Carolina Secretary of Transportation Jim Trogdon will speak. Rev. Eddie Stillwell will speak at the committal service at Fairview Memorial Gardens immediately following the service. Conrad's family wishes to extend their deep love and appreciation to Skyland Care Center for their excellent care of Conrad. In lieu of flowers, the family requests that memorial donations be made to: First Baptist Church, 669 W. Main St., Sylva, NC 28779, United Christian Ministries, PO Box 188, Sylva, NC 28779 or Southwestern Community College Foundations, 447 College Dr., Sylva, NC 28779. "My Dad never had a college degree or a Master's degree, but he had a doctorate in kindness and common sense." Karen An online registry is available at: www.appalachianfuneralservices.com Appalachian Funeral Services is serving the family.
To order memorial trees or send flowers to the family in memory of Conrad George Burrell, please visit our flower store.