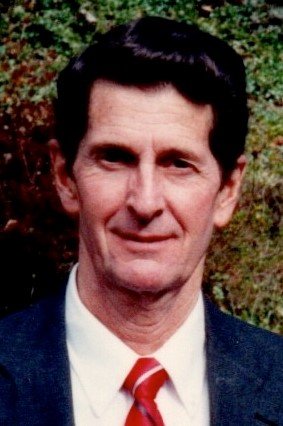 Frank graduated from Western Carolina in 1954 and served with the U. S. Army from 1956 to 1958.  He worked at Dayco Corporation in Waynesville as an industrial engineer for ten years, before moving to the Mead Corporation in Sylva as a cost accountant until the plant closed in 1976.  He then returned to Dayco for three years until he got the opportunity to return to Sylva, where he worked with the North Carolina Department of Transportation as division accountant until retiring in June of 1994.

The church was always a very important part of Frank’s life. He was a lifelong member of the First Baptist Church of Sylva, where he served as deacon, trustee, usher, church clerk, treasurer, and a leader with the Royal Ambassadors, a missions organization for boys.  He enjoyed working with the Handy Man program at First Baptist and on the grounds of the church.  After retiring, Frank volunteered with Habitat For Humanity and Neighbors In Need.  Frank made friends easily and was a friend to all.

Frank was also proud to be an Eagle Scout and was a leader with the Cub Scouts when his boys were young.  He also coached their Little League baseball team.

Appalachian Funeral Services in Sylva is honored to be caring for the Crawford family, who will receive friends 6:00 - 8:00 pm on Monday, August 9.  Funeral services will be at First Baptist Church of Sylva at 11:00 am on Tuesday, August 10, and the burial will be in Keener Cemetery in Sylva.

The family thanks the staff of Care Partners for the excellent care they provided Frank in his final days and wants to give a special thanks to Frank’s caregivers at home, Arlene Christian and Marie Connor.

In lieu of flowers, the family suggests that memorial contributions be made to the “Raise The Roof” campaign at First Baptist Church of Sylva, 669 West Main St., Sylva, NC 28779.

To order memorial trees or send flowers to the family in memory of Frank Moody Crawford Jr., please visit our flower store.