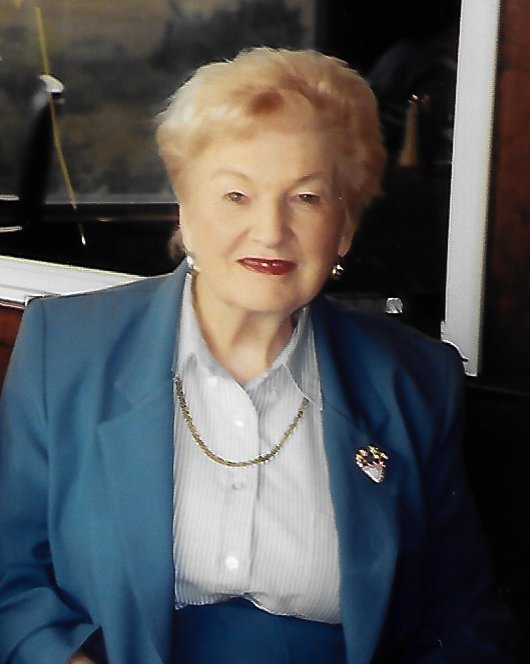 Irene Hooper, age 97, passed away on Thursday, December 26, 2019. Just 20 days from her 98th birthday. Funeral services will be held on Monday, December 30th at 11:00 AM at Cullowhee Baptist Church in Cullowhee, NC with Revs Jeffrey and Tonya Vickery officiating. Burial will follow in the David Rogers Cemetery. Visitation will be held Monday, Dec 30 from 10:00 to 11:00 AM at the church. She was the wife of the late Elmer Hooper and daughter of the late Grover and Mattie (Morgan) Bishop. Irene was born in Cullowhee and was attending Cullowhee High School when she met her lifelong sweetheart, Elmer. One quote in her high school yearbook said, “What’s Irene got that we haven’t got? She’s got red hair and Elmer.” Elmer and Irene wed on August 16, 1941, started a family and shortly thereafter Elmer was drafted into the military. After Elmer’s service concluded, they relocated to Northern Virginia to build their “second home”; raise a family; establish themselves in the church and community; and, build their professional careers. Immediate and extended family were frequently together. Many were the birthdays, celebrations and holidays where family gathered together to recant lifelong stories, catch up with what everyone has been doing and create new memories to tell at the next get together. At church, she taught Sunday School and volunteered. Irene started working with AT&T as a switchboard operator and worked with them for over 45 years across many professional roles. After retiring, she and Elmer returned to home to Cullowhee. Although in retirement, it was often remarked that she was busier than when she was working. Leading and participating in community activities and advocacy; dabbling in government and politics; and, serving in the church. She is survived by her son, Carl Hooper of Cullowhee, NC; grandchildren Bob Brinson of New Bern, NC, Greg Hooper of Falls Church, VA and Brian Hooper of Poughkeepsie, NY; three great grandchildren and a large extended family. She is preceded by her husband, Elmer Hooper; sister Jane Garner; brothers Edgar, Jess, Ray, Locke, Robert, Charlie Bishop; daughter Sandra (Hooper) Brinson; and, granddaughter Judy (Brinson) Conseen. Appalachian Funeral Services of Sylva, NC is serving the family.
To order memorial trees or send flowers to the family in memory of Irene M Hooper, please visit our flower store.