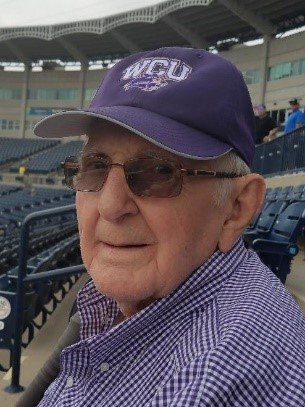 James Baxter Wood, 88, of Cullowhee passed away, April 23, 2021, after a brief illness.  Born May 15, 1932, he was the son of the late Dillard and Agatha Wood.  He was preceded in death by his wife, Sue Wood, to whom he was married for 58 years.  He was a member of a large family and was preceded in death by siblings, Lazelle, Blanche, Peggy, Helen, Betty, Barbara Jo, Jack, and Don.

He previously served in the US Navy during the Korean War aboard the USS Kearsarge.  He was honored to be part of the 100th flight of the Blue Ridge Honor Flight which visited all of the memorials in Washington, DC.  He received undergraduate and graduate degrees from Western Carolina University and was retired from WCU after more than 30 years of service primarily as Director of the University Center.  He also taught Business and Psychology in the early part of his career at WCU.  In those capacities, he interacted with a multitude of college students, many of them he considered as part of his family.  He served as the founding Faculty Advisory to the Delta Alpha Chapter of Kappa Alpha Order in 1964 and served in this capacity for over 30 years, earning various honors, including induction in the Ed Chambers Smith Province Court of Honor, the Knight Commander’s Accolade, the dedication of the Baxter Wood Chapter Room, and the creation of the Baxter Wood Family Scholarship Fund at WCU.  Over those years, the brothers of KA became family.  He loved them dearly.

He was very involved in WCU Athletics, serving on the board of the Catamount Club as president and board member for many years.  He loved the Catamounts and watched from stadium and arena seats for the last 60+ years.  After the Catamounts, he loved Alabama football, Tar Heel basketball, and Yankee baseball.

He was a member of Cullowhee Baptist Church and served on the Board of Deacons for many years.  He was also a 32nd degree Mason, and served as the Master of the East LaPorte’s Lodge 358.

Many thanks for the graciousness and kindness extended by the staff at The Bridge at Lake Point Landing where he called home for the past 4 months.

He will be missed greatly and remembered with love.  His was a life well lived.

A graveside service will be held at 2:00 p.m., Tuesday, April 27, 2021, at the Cullowhee Baptist Church Cemetery in Cullowhee and is open to the public. Social distancing and wearing of masks is requested.  A memorial service honoring his life will be scheduled in the fall prior to a Catamount Football Game which is where he would be every fall.

Appalachian Funeral Services of Sylva, NC is assisting the family with arrangements.

To order memorial trees or send flowers to the family in memory of James Baxter Wood, please visit our flower store.