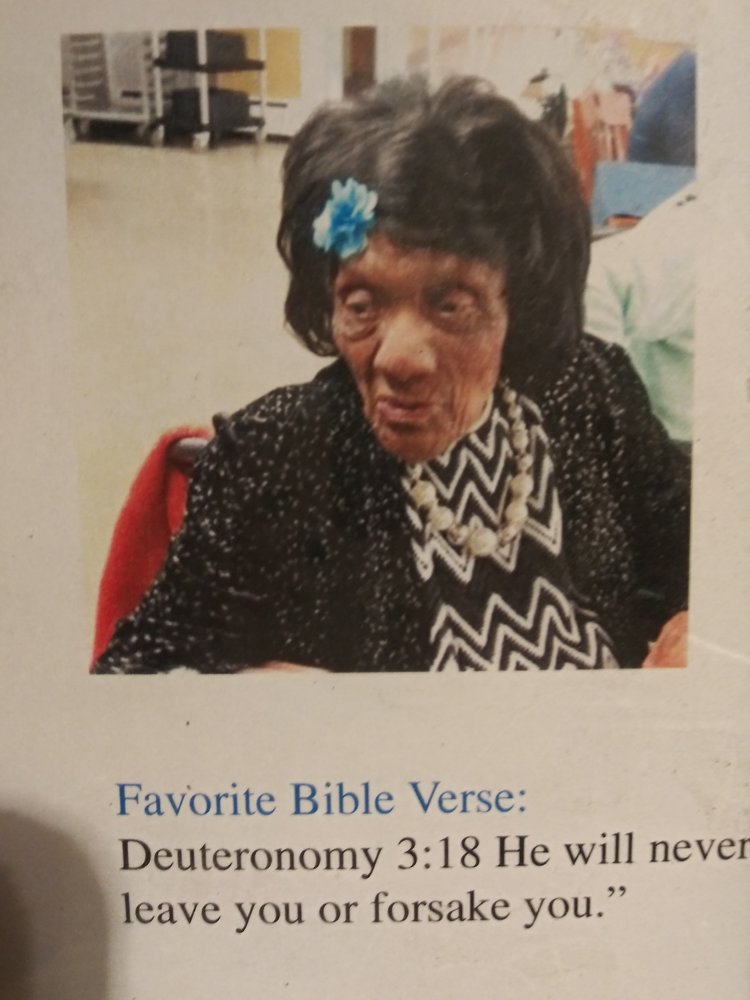 Josephine Reva Dorsey was born January 19, 1919 living to be the oldest African American citizen in Western, NC. She was born in Badin, NC to Henry and Rose Ann Bryson Dorsey. She is preceded in death by both parents; One son (Herman Dorsey) Four sisters and one brother • Annie Cullins • Mary Alice Bennet • Ruby Cullins • Mae Ellen Pickens • Nolvin Dorsey She worked at Cullowhee College for several years after school and went on to domestic work until she was well in her sixties. Reva was well known and loved in the neighborhood for her outspoken personality. If it came up: it came out. She had a great love for family. If she called you “Kinfolk” you could believe you were related in some way, and she could tell you exactly how. If you have spent any time with her you have heard her say more than once. "Dont take no wooden nickels! (Because you sure can't spend 'em)” This means “Always be alert and don’t let yourself be cheated.” She was also know to say, “Give me my flowers while I’m living” She was a lifelong member of Liberty Baptist Church and lived to be 101 years old. She attributed her long life to living in times when the community thrived on honesty, love, hard work, and the church was the foundation of life for all black families. She had a deep love for the Lord engrained in her from childhood and showed this love in words and actions up until her last moment on earth. If there was one piece of advice she could leave; she would say “Stay strong in the Lord younguns and you will never have to beg for bread” Reva leaves to cherish her memory: One brother Ernest Dorsey of Smithfield, NC Four nieces; • Sharon Lois Cullins (Canton NC), • Sandra Pickens Benning (Pete) of (Toledo Ohio) • Jeraldine Pickens Burkes (Ralph) of (Toledo, Ohio) • Phyllis Pickens (Washington DC) Four nephews; • Gordon Cullins (Waynesville NC), • Frank Dorsey Pickens (Chine) of Washington DC • Henry Dorsey Pickens (Terri) of Charleston, W. Va • Thomas Leroy Pickens (Deborah) of Charleston, W. Va. And a host of cousins, friends, and relatives.
To order memorial trees or send flowers to the family in memory of Josephine Reva Dorsey, please visit our flower store.