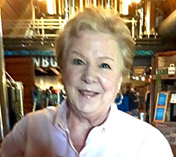 Juliann Daley Chapman, 68, of Sapphire, North Carolina passed peacefully in her sleep at home on March 6, 2021. On May 2, 1952, she was born in Atlanta, Georgia where she resided most of her life. For the last 35 years of her life, she lived and raised her family with her husband, Tom, in Marietta. After retiring in March of 2020, she and Tom realized their dream of living in the mountains where they recently moved to their new home in Sapphire.

Julie was the wife of Thomas Lacey Chapman, and the mother of daughter Lacey Chapman Davis (Will) and son, Ross Montgomery Chapman. Julie was the daughter of Julian and Dottie Daley. She was the sister of Julian Montgomery Daley (Melissa, sons Scott and Chris) and Joy Belinda Daley Dietz (Eric). Julie’s life revolved around her family Their well being and happiness were her joy and purpose. Julie and Tom were married for 45 years. Tom was the love of her life. Until the day she died, she always referred to him as her boyfriend. Their love is enduring and fulfilling, bringing them joy and contentment all of the days they shared together. Their shared love of family, friends, football, cards and trivia, found them laughing and entertaining on their deck often. Julie dearly loved her wonderful children, Lacey and Ross. She nurtured them through life with a great sense of humor and a swear jar. Both Lacey and Ross brought her tremendous joy and pride as she and Tom witnessed them grow to become lovely, generous, kind, productive citizens, a blessed legacy.

Throughout her life, Julie was active in her community through work and volunteerism. While attending North Fulton High School, Julie was active in French Club, Beta Club, Bull Dog Club, Drama Club and school choir. She was a cheerleader for 4 years, lettering in both cheerleading and diving. Julie was the State High School Diving Champion. She attended South Carolina where she met Tom. After their marriage in 1975, she worked for South Carolina National Bank. It was in Columbia on Dec. 9, 1980, that Julie and Tom received the tremendous gift of their first child, Lacey.  Lacey brought them both such joy. In 1982, their little family of three moved to Virginia Beach. A couple of years later, they were blessed with a son. When Ross was born, he incurred serious medical issues. Thanks to the dedicated staff at Kings Daughters Children’s Hospital, Ross thrived. Julie’s gratitude for Ross’s care spurred her to volunteer for many years supporting the hospital, eventually volunteering nearly full time in 1987 co-chairing the Holly Festival which raised over a hundred thousand dollars. They moved to Atlanta in 1988 where she turned her focus to full time parenting. She volunteered in the children’s program at Mt. Bethel United Methodist Church. She edited the grade school paper, and was Little League Team Mom. Julie started a new A.L.T.A. tennis league. Their team went on to win the C6 City Championship that first season. With her children grown, she worked with her father at Real Estate Associates in Marietta. She continued to work there for 17 years until her retirement.

Our dearly beloved Julie’s life will be celebrated at Johnson Ferry Baptist Church at 2:00 pm on Thursday, May 13, 2021. A reception will follow for family and friends. In lieu of flowers, the family requests that donations be made in Julie’s name to Fishes & Loaves Pantry, PO Box 865 Cashiers, NC 28712 or The Humane Society of Cashiers, 200 Gable Dr. Sapphire, NC 28774.

To order memorial trees or send flowers to the family in memory of Juliann Chapman, please visit our flower store.