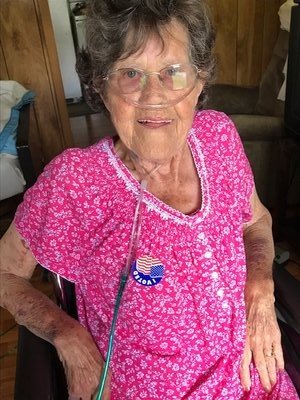 Lula Owen Swann, age 83, of Sylva went home to be with the Lord on Tuesday, December 18, 2018 at her home surrounded by her loving family. She was the daughter of the late Dudley and Bessie Fisher.

She was a founding member of Promise Land Baptist Church of Tuckasegee, NC. Lula loved quilting, sewing and working in her flowers. She dearly loved all her family and was loved by many in the community.

In addition to her parents, she was also preceded in death by her two husbands; John Lewis “Red” Owen and David Wallace Swann, as well as by three brothers.

Funeral services will be held on Friday, December 21, 2018, at 11:00 am at Promise Land Baptist Church, Tuckasegee, NC, with Revs. Larry Bryson, Michael Queen and Jeff Powell officiating.  Burial will follow in Promise Land Cemetery. The family will receive friends on Thursday, December 20, 2018 at Appalachian Funeral Services from 6:00 until 8:00 pm.

An online registry is available at: www.appalachiahfuneralservices.com

To order memorial trees or send flowers to the family in memory of Lula Naomi Swann, please visit our flower store.